Welcome to our company’s monthly updates, where we’ll fill you in what we’ve been up to, share news, introduce new team members and more. Let’s dive in! Extra Office space Our team is growing bigger and bigger and as we are welcoming new team members to Pärnu, we had to get more creative by the […]

Welcome to our company’s monthly updates, where we’ll fill you in what we’ve been up to, share news, introduce new team members and more. Let’s dive in!

Our team is growing bigger and bigger and as we are welcoming new team members to Pärnu, we had to get more creative by the week on how to fit everyone into the office. Awesome news is that we managed to get more office space in our current office building. Now we get to actually miss each other. 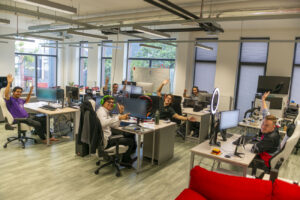 Our CEO Marten gave an interview to an Estonian news site Geenius, where he talked about our company’s rapid growth, what are our future plans, how we have managed to relocate so many game-development talents to Pärnu and more. The article is in Estonian, you can read it here. 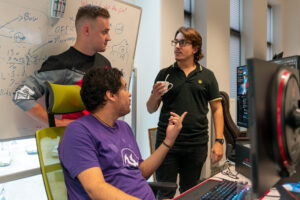 We had a well-deserved company retreat at a beautiful island called Hiiumaa. Hiiumaa is the second-largest island in Estonia and is well known for its historical sites and pristine nature.

On the first day, we had a bike tour on the island, trekked on the old military grounds and visited the Tahkuna lighthouse. Later we enjoyed an authentic Argentinian grill specially prepared by our team members from Argentina. The night ended in the hot Sauna and everybody dancing in the rain to the hyped beats blasting from the speakers. DJ’s were our own talented sound team members.

The second day of the retreat, our CEO Marten and COO Bury held a dance workshop for everyone. The whole team had a blast playing Capture the Flag in real life with airsoft guns, don’t worry, no one got hurt too bad. We ended the night with improv and celebrated all our team members by handing out Gamecan Awards 2021.

It was awesome getting half of the team to Estonia despite everything going on in the world and spend such great time bonding together!

The growth continues as we welcomed 6 interns to our company and they will be creating a game between themselves. We will guide the interns through the whole game development process from start to finish with a set goal to produce their first game. They will learn more about art, game design, level design, blueprints and code.

In August we welcomed 4 new team members to Gamecan!

Happy to have you on the team!

Some of our team members got first aid training th

Our office got some exciting additions recently fr

Our art lead Mattias talked about his job and 3D d

Spring has arrived to #Pärnu!🌱☀️ These sh

While relocating our team members to #Estonia, we